Please come back when you are 21 years or older! 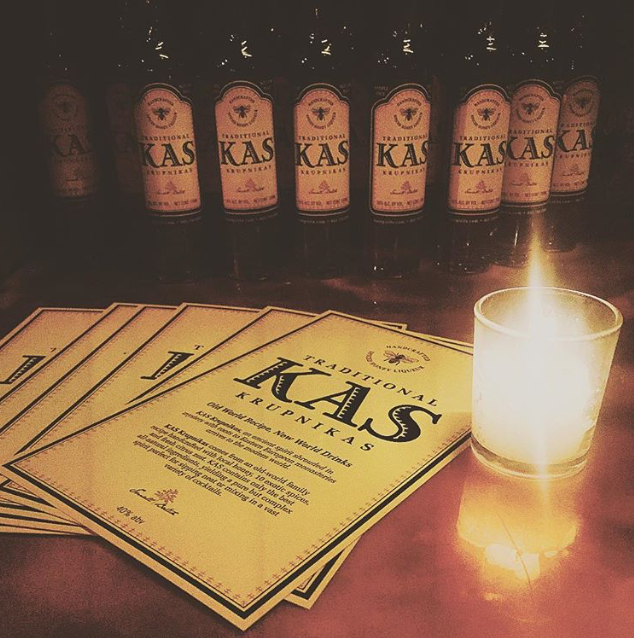 KAS Spirits produces small batches of their spiced honey liqueur in Mahopac, NY from a generations-old family recipe for krupnikas, a traditional Lithuanian spirit.  The spirit has become a popular choice in retail stores like Sterling Cellars and great bars from Pour in Mt. Kisco to Maison Premiere in Brooklyn. KAS Krupnikas features all-natural ingredients from local clover and wildflower honeys to 10 exotic spices and hand-peeled citrus, making it especially popular with mixologists, locavores and a generation of people more conscious of the quality of their drinks.

“This party was really meant as a thank you to the people who have supported us in the first year,” says KAS Spirits’ founder, Kestutis Katinas. “KAS Krupnikas is a recipe I’ve made for 25 years before releasing it to the public last year and the support we have received is astounding,” he continues. “We would enjoy it neat or on ice but within our first year we discovered how versatile it is in cocktails. The drinks that bartenders create, plus the 60 we have created in house are simply astonishing. We realized that KAS Krupnikas can be enjoyed in so many ways.”

The party guests enjoyed free KAS gift bags and passed hors d’ oeuvres until the First Annual KAS Awards began. The categories ranged from Best Tasting Spot to Top Brand Ambassador and each winner received an engraved golden flask. All guests were also invited to see the new label that will be launching this fall.

“We are extremely excited about our new look” says KAS Spirits Marketing Director, Faye Postma. “After much deliberation and market research, we decided to update the branding via the label and a new website. We feel the new look is more in line with the handcrafted, small-batch aspect while still presenting its Lithuanian roots and exotic nature.”

The high quality of the spirit has been noticed by Wine Enthusiast Magazine, which has awarded KAS Krupnikas with a 92, putting it amongst the top liqueurs. Going into year two, KAS Spirits plans to continue gaining in popularity, especially heading into the busy holiday season.

“Honestly, KAS sells itself. It’s such a great product that people really enjoy drinking,” states KAS Brand Ambassador Winner and NYC bartender, David Renwanz. “I’m not sure they had any idea how popular their spirit could be but I think they’re going to really find out this fall and winter.”

KAS Krupnikas is currently available at fine bars, retailers, and online. It is being distributed directly by KAS Spirits, LLC and is available to licensed businesses in the state of New York.